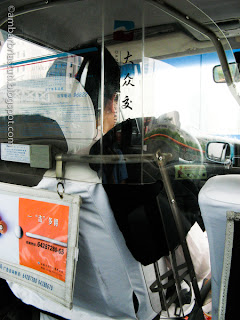 Shanghai stop raining. I decided to go to the main place, The Bund or Waitan as local would called. I have been notice that I need a card to show where I am going on the back of hotel's address. It's essential since not many people in China had good literacy in Latin alphabet and English. So you have to ask Shanghainese to write down in Chinese to explain where you want to go. Alternatively you show the place on the map. Usually the taxi driver had a map ready on his car, but there are plenty free map that you can grab in the airport. Other tactic is you pronouns the words. They will figure it out anyway.

Taxi here were cheap, about 11 RMB for start meter. Easy to find, just need to flag down anywhere on the street. I was able to get in the front of hotel in Hoangqiau not far from the domestic airport. Average it will cost around 25-40 RMB depends for the traffic. Shanghai had the reputation of traffic jam quite often.

Things that I noticed about taxi is rarely they had AC. They will open the windows to get fresh air, but quite clean and tidy. Minimalist I will say. No safety belt for passenger, then prepare for the joyride. 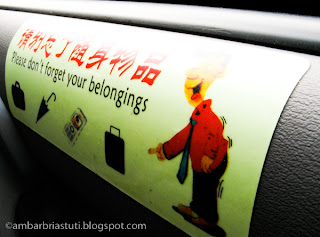 There was a plastic wall divided the driver and passenger. It’s looked like a cubical protection. You still can see him though, as the plastic made for see through and had a aluminium bar to hold it. Most of the taxi will understand what you asking for. The ‘tarzan language’ always useful here. I wish to learn Mandarin next time.
china travelling