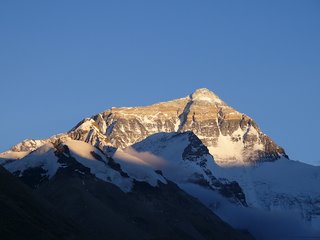 I heard about Indonesian Everest's Woman Team far before they released to the national paper (Wed 19 July). As an Indonesian myself I was sceptic about what these expedition intents to, launching the program when we've been battered by natural disasters and political unstability was not so wise in the point of view. Tsunamis, eartquakes, volcano eruption, terorist bombs just about adding misery into our believe that we can continue live in a 'normal' way.

Then I found their blog (in bahasa Indonesia) that give deeper information about the expedition. I got remind you that I am not living in Indonesia and not many publication covers these. Wierd but true regarding mountaineering is not a beloved sports in those country. Not many records of the mountaineering in Indonesia, specially woman. The only impresive record did by Aryati who scaled Annapurna IV in 1990 and became the first Asia woman to do so and Alps Indonesian Woman's Team (1988) who did magnificent job in 5 summits in Europe's continent.

So why they're doing now ? I am not sure, but I reckoned this is triggered by Singapore Women's Team 2008 which been launching similar program started in 2004. I did remember when the first Everest Indonesian Team 1997 was in racing with Malaysia's team to be the first SEAsia country to conquer the mountain. The guide, Anatoli Boukreev who suffered losing his reputation on a most talked mountain disaster -described by Into Thin Air Jon Krakauer :

"there were many Indonesian climbers who wanted to climb Everest, so we had to pick the best. It came down to mostly military people, and I like that, I like that better than clients who pay $65,000 to climb. There is discipline, they understand the risk. I told them, you can succeed -- it's not likely the first time, maybe 25 per cent, but you CAN succeed. You can also die. By April 16 they had already been to camp III, well ahead of most teams". (mountaizone) (1)

With no experience in snow/ice climbing whatsoever the Indonesian's team againts all odds by put the first man on top of Mt Everest even he never seen snow before. So why Singapore's team ?

With so much wider media coverage, the 9 strong members grabs more public support by campaigning their program. They were training in the environment that close to Himalaya's condition ; New Zealand, Southern China, and others minor Himalaya's peak in attemp to put Singaporean woman on the mountaneering's map.

The length of the program (4 years to completed all training) are more than enough to raise confidence to the whole's team, while the Indonesia's is now two milestones behind. Since launching the program they're still put the fitness and stamina training in West Java's area. I've got to kick myself about they're going to do in spring 2007 !

Actually there was an Indonesian women who reached the roof of the world before. Her name is Clara Sumarwati. She was part of the Annapurna IV's team, beat the Aconcagua Chile, two attemps of Everest then made her up in 1996. Back home in Indonesia, she faced severe critism about the expedition because lacked of evidences. Local climbers were in doubt about she was actually put her foot on top while no photographs with Indonesian's flag in hand just like Hillary did in 1953. I will say that the argument were "totally unacceptable" if you realise only two pictures rescued from the first five women who climbed K2 -the most feared mountain in the world (2).

Some source said that Clara was actually DID on top of the world. Yes she did, but she did not have a permit that allowed her to climb the mountain released by local authority. That's why she was not known in the regular statistic in the Himalaya Database compile by legendry Elizabeth Hawley.

As the Indonesian team gear-up to the next level, I was convinced that they might have pursue a dream. Not the same dream that led 1997's team who came in massive success. Right now there is NO Anatoli (he died a year after guided the Indonesian's team in Annapurna's avalance) , there is NO big funding behind the team even not enough publicity to generate positive support. I know they will try their best to achieve the dream, but just like the sound of the dripping water ; it's almost soundless, not even been notice. Go for it when you can girls !