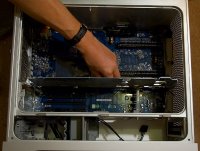 We moved from Singapore with beloved G5 PowerMac with us. It's only took a week or so and then arrived home in Weymouth. Guess what? we heard rattling sound from the machine. Instead of putting on we decided to investigated those source of sound. The problem came when we realised that was from under motherboard. And yes we had to take apart our machine. 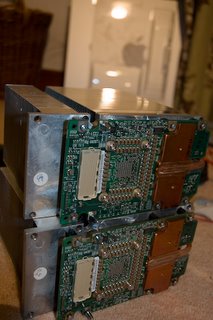 Then my technician came along (unfortunetaly he is my huby), glad that he looked sure what he was doing. He said that he never opened G5 machine before, but the good news that he had apple computer before. That was about 25 years ago. Pffff..... 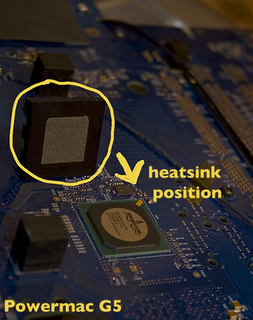 We bought the PowerPC May last year in Apple Centre Fl5 Funan Digital Life for about 6grand (local currency). We added some memory into 2.5 GB Dual Core Processor 2GHz. It is beast, yes but also really really hot. So may be something on it came off when we transferred back to UK. Took about 2 hours learning what we should do. Taking apart each pieces, wriggling around, bounced forward-backward. Nups we got to open it. Started from the aluminium chasis, then the fans (so many fans), two lovely processors then motherboard. Ups ..then we found the culprit. It was the heatsink that rattling around our machine.

Based from the mark on the chasis, we reckoned this been apart quite long time. The other problem how to found pad that can be glue them into it's place. We searching on net but found nothing. Then I was down to local computer shop to get some advice. He said to put bits string and keep it on the pcb. And yup we've done that, put that little heat sink on, put all together and tested it. It failed. The machine still generated heat, so knocked apart again. This time it worked perfectly. So yes..we had little bit fun with the G5.

I am looking forward for the 13.3in Intel MacBook. I will post review about the black machine. It has a good review from Leo Laporte -a guy who responsible on MacBreak videocasting and tWIT podcasting.
united kingdom