Today Monday 15th May, Mt Merapi erupted. It has been known as the most active volcano in the world. This is about my personal account living with Mt Merapi. I was 15 years old (1989's) when move in to Jogjakarta -a city about 25km south Merapi. Jogjakarta was a great kingdom hundreds years ago but maintain its status in the Indonesian Government political system. The King or Sultan is a Governor of Jogja Special Province.

The speciality of Jogja based on its culture and belief. Even though Islam as the major religion most of festivals are descended from Hindu. In this city you will find the greatest Budha and Hindu Temples (Borobudur and Prambanan). The Javanese people believe that centre of universe replicated into their kingdom and surounding. The Palace, sea (Segara Kidul), mountain (Mt Merapi) and elements of nature were a system that create a balance and protect each other. Every year Sultan will sacrifices food, meat etc and send it to the every corner including Merapi. There is someone who responsible to 'contact' spirit of Merapi with Jogja kingdom. He appointed by Sultan himself. That man is Mbah Maridjan.

My first encounter actually in 1992 when Mt Merapi erupted with massive lava flow. I was just graduated from high school which I used to be a member of hiking club. I climbed Mt Merbabu where lied across the Mt Merapi. On that day I heard about Merapi. Like today's news, everybody flocked into Mt Merapi. But I decided watching it from far. I drove motorcycle went to the highest place I can find. Someone told me that the flyover (recently built) was a favorite for people seeing lava at night. Oh yes I was there. The beauty but deadly lava flew brightly. We were amused and wondered in same time. 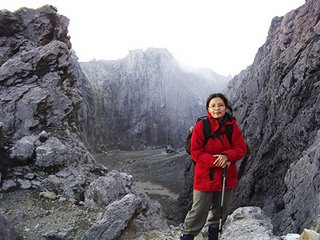 Then about end of 1993 the University that I went moved to the new location -Jalan Kaliurang about 8km from the last village of Merapi. During that year I experienced so many volcanic earthquakes that I get used to it. Sometimes when you lying on the floor you feel the earth moving, but did not caused any destruction. I used to go to the villages for walking or simply get out from buzzy life as a student. Having noodle soup at the hiker warung (food stall) with my trusty Honda motorcycle. I experienced the 1994 eruption when most of the victims been carried through Jl Kaliurang with badly damaged skin from wedhus gembel ( pyroclastic flows- an extreme hot cloud that flew along with lava). In total 43 people of Mt Merapi died on that day.

I love Merapi's people. They are honest, open and kind. I respect their belief and tradition. Then it was three years ago (2003) that I managed to climb Mt Merapi. I don't know why I did not do it when I was living there. Being so many years living outside Jogja and Indonesia made me a need to get close to Mt Merapi. I decided to climb it, even though I heard many disturbing things about it.

I started from Selo, a small village on the northside of Merapi. It was the easiest route which only take few hours to go to the summit. I reached Selo about 3pm and managed to get a local guide. We spent night at his house, having rest and dinner cooked by his auntie. About midnight we started climb. The weather was great, we can see Mt Merbabu and city of Magelang.

The route itself was quite demanding with steep terrain. We reached Pasar Bubrah -a gully that lead you to the rocky part of Merapi. It was early morning about 0530 when we felt strong winds. We stopped as our guide hopelessly tried to warm himself. The wind was powerful so that it made it difficult to walk, but we continued and climbed to the crater. 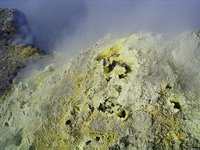 I never imagine that Merapi soooo beautiful. It was vicious but you can see the beauty of it. The crater consisted of basalt (hard) and pumice (light and crumbly). I smelt sulphure when we were close to the fumeral. As we moving down to the main fumeral, that place was full of sulphure gas that made me dizzy and difficult to breath. Our guide appeared with handful of sulphure rock. He said that he need it for his livestock (cows). Several of them had a sign of illness and he believed that sulphure from Merapi will cure them.

I went back to Mt. Merapi this year to walk with a friend. He took me to the hill that been swept by hot clouds from 1994 eruption. The layers of cold lava have been rejuvenated with early plants such as moss, algae and lichen. After many years Mt. Merapi was healing itself. What happen today I don't know, what's Mt Merapi going to do? We accept it as our destiny.
indonesia travelling