Too Much Too Late for Airasia X 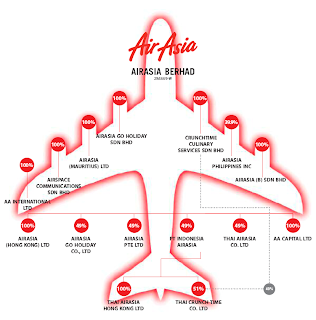 Seemed like Tony Fernandez have to keep his promise, bringing a dream to link Asia to Europe in cheaper way. It is a lucrative route and known for battle ground from the established airlines. Richard Branson give a nod for this married even though this is going to make the current relationship between Virgin with Singapore Airlines might sparked jealousy.

I do understand the bussiness sense of this marriage. Branson want to expand his empire worldwide. Through Virgin America (US), Virgin Atlantic (UK) then Virgin Blue (Pasific-Australia), Virgin expanding it's arm rapidly, growing in impressive level. It recorded pre-tax profits of GBP 72m, as compared to GBP 42m in the prior year just for the Atlantic, made Virgin winning the sour competition with British Airways.

Airasia itself become the dearest budget airlines in SE Asia. It reached profit before tax in 2007 as RM 276m increasing from RM 86m in previous year. Tony Fernandez did not try to hide his intentions to launch on the first pole. He landed a deal with Premiership legend to be an official Low Fare Airline for Manchester United. At first Fernandez seemed give indication to link Manchester and Kuala Lumpur directly. The twin city having deep connection as most Malaysian student concentrated in this city, and the love of glitzy football celebrities.

It did not surprise me Airasia then choose Stansted Airport. It's cheaper and closer to the capital. Manchester might now lagging behind Liverpool, and London is the best lure for more prospective visitor. As number of student from abroad specially Malaysia dropped significantly this year, I think Airasia made the best decision.

But not now please.

Economy is shrinking! Most of travel industry feeling the pinch even though the oil price drop to the bottom US$50. Most people are not willing to spend money going abroad while they are worry about the state of their occupation. Jobless number increasing, travel just about the sin as bailout regardless so called 'cheap flight'.

Most of analyst predict about the end of budget flight. Lesson from Oasis Hong Kong Airlines, which launched in October 2006 between Hong Kong and London Gatwick and Zoom Airlines, which started in June 2007 between Gatwick and New York, both collapsed this year amid global oil prices. If the recision deeper, Airasia can be in the same fate.

I thought Fernandez knew about it. Indeed is a big gamble for Airasia X. But the game worth to play. It's already way too much money spent for new aircraft or media campaign, circling for new partner and seeking permit for new route. Too much to hold back, making sense of situation.

Yeah too much too late for Airasia. And good luck Tony!


Update :
Just found out that Malaysian is the top Britain visa abuser. British authorities would probably decide around March whether Malaysia would fall under the visa regime. This will put Airasia even harder to keep up passenger from Asia side, but probably find more interesting for UK counterpart, seeking cheaper holiday in traditional backpacker route.
airlines malaysia united kingdom