In this economic downturn situation, managing personal finance become a crucial issue. When the first time setting up accounts in this country, I was facing disparities. Mainly because the financial institution so widely spread, even separate from one another. For example, I have a bank account in Bank of America with an online service. Then I have a credit card from those bank, that hopefully link to my bank account (well, assumed to pay your monthly of CC debt). Instead I have two sets of user account to access both rather than one to review in whole system. This is also happen with Store Cards or Investment Banking. I ended up with list to access each of one.

When we used to live in Singapore, we were virtually having no big problem. We were limit ourselves with one or two banks (including debit and credit card), make life simple as possible. The financial system that Singapore inherited from British's felt seamless, rather smooth transition for me including taxes system etc.

But in States, those system so different. We now have to deal with complex and intertwined system, but also keep conscious about the spending. Overall, the connections was not there. That's why we need integrative money management. How's to simplify view of your personal finance situation.

At first I choose Quicken Online since they're leading in this industry. With monthly cost $2.99 (it's free from October 2008), Quicken answered many problems. My big relieve is I am now able to track down my spending, make database and also feeling in control.

Then a few weeks ago I introduced by Mint, another web based money management. The experience with both (or three actually), with addition Easy View (Yodlee), might give better perspective which one that probably the best for you.

Quicken Online (QO) is the best in this. It's easy and comprehensive. The only concerned is if you deleted the account, it will not effect straight away. The system record as you put in until few days later. Mint was quite easy but they don't working in the vast financial institution in US. In this case Mint did not recognized the investment account from E*Trade, but indeed on it's bank. But I noticed Mint also having Paypal to record. This is smart when you already open online retail. But for me is useless.

The best thing about web is you can download the file to create database. It's time saver, specially you don't need to type in manually. QO and Mint both can be download into .csv file but only in limited numbers mostly under 100 transactions. This is bit problem as you have to schedule to download for every week or so (depend how's your life style is), and also did not record the cash spending. It does show the ATM withdrawal but ups to you to enter manually some of you add in info. Mint have capability to split the transaction, say you take $100 for cash and using half of it for dining.

But Mint did not record for cheques records. This is the big hole that should be fixed, otherwise the system did not reflect actual spending. I thought I have to report as a bug :) Updating data is also bit concern for Mint. They are bit late for current transaction. Usually takes about a day or two to appear, leaving me to relay on ebank which served better real life data.

I have to put attention on this because QO is facing a big big problem with their Auto Category. The system records my pattern based on the card that I've used. Unfortunately the card only show an address rather than the Retail/Restaurant/Cafe. Somehow Quicken did not simplify this information and take the previous similar address to put in same category. I did numbers of time to contact the team and asking help in Forum. But this problem still occur leaving me in desperate effort.

What make this matter because if the transaction wrong (even the amount correct), the database became useless. I will having huge bill of spending in Electronics, while in fact most of it goes to Groceries. 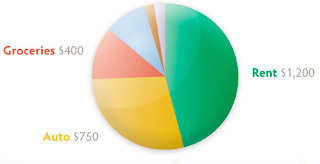 Yes, using Mint and QO give an overview what your spending spree went. This month probably we are bit hit the roof as buying new disk for backup. The pattern can be view as bar chart or pie chart to follow route of categories. Also we can put budget planning for several sectors such as Food and Dining or House Bill. I can reduce my spending in some and also review area that I can scrap altogether. Again it's not save you, but it will give sort of sense of reality. You've probably don't realize how much you've spend until you face the numbers.

Mint and QO able to send alerts for any payment due, for example credit card or utilities bill. It's really good to avoid excessive charge for late payment. Also send SMS/email if you overspending or over your budget or you only got some amount money left in you bank. It can be set, easy to maintain. You've also given a summary weekly, and review your goals. The goal can be anything such as : pay the car or set aside for saving, or reduce eating out :)

The best Mint can offer is Trends, by looking your spending compare to other users by city or states. Example : to see your average house bill to people who living in San Jose or San Francisco. This is great tools, to justify others people pattern. I called this passive interactivity. In some point it can be "gray area" for data sharing, but since it stored anonymously I can predict usability of data getting accurate each time depends of how many users and level of errors.

Ways of Save also feeds the info about financial scheme that been offered to make your benefit. In UK this comparison table chart really taken off as been use by Financial Analyst to see which institution that better products for consumer. But in US, with this facility on Mint helps lots for first timer like me :)

Quicken got funny way to organize that withdrawal to saving records as spending. It's really bothered me if I open QO, the front page saying that "I Overspent $$" but in reality I moved to other saving account.

Well, both not perfect and still developing. In my opinion Mint got better grasp for what people wants. Easy to use, interactive and the most important giving people information about situation. How to manage wisely and safely. Just a note : all these services only for US (dunno about Canada). Mint been feeds by Yodlee, who also works with other banks such Wanchovia and HSBC. But the user interfaces is really different. The way of deliver the data to user, Mint got advantages. No wonder it's been praised by WSJ or PC World.

QO try to catch the development of Mint by offered FREE now. If they are not fixed the commons bugs most people like me probably will switch to Mint. For some people it did not change the financial habit, but by having better management it 's the key to survive in this storm.
technology