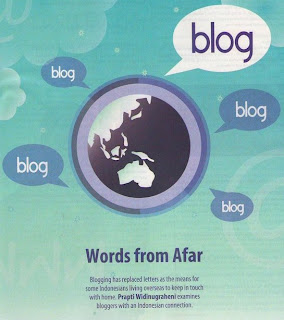 I've been honored that this blog listed as one of good blogs based from the article Words from Afar in Jakarta Post Weekender August 2008. Thanks to Yiyit in Australia with her piece to investigate alternative media to connect our roots. The article digging into blogs as a media to communicate with family and friends while you're living abroad.

You've probably could not see Cerita Ambar in online version, instead it appeared as sidebar column. Actually those column has more intriguing notes which one of them is :

Speaking about unwritten rules? agreed, that you've need skill to read behind the words.