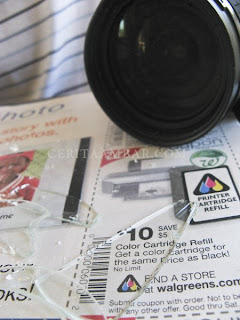 It happened after we climbed Mt. Kinabalu in Malaysia on 2nd March 2006. After long trek down in rain and soggy soil we ended up stay at Summit Lodge –small bungalow for 4 near the Park entrance. We bought the lens in Singapore barely 2 weeks before trip to matched with Nikon D200. We thought that would be great for taking wildlife photos at Uncle Tan Jungle Camp at Sungai Kinabatangan, Borneo.

The camera and lens put together on the hall’s table about 2.5ft high. We had good nap that evening and woke up about nearly sunset. Mr. C walked in the living room probably still in state of deprives, knocked the shoulder on the camera and with the big bang both camera and lens ended up on the solid wooden floor.

I was stunned, couldn’t say a thing. New lens, new camera just on the beginning of trip. Mr. C even angrier with himself rather towards me.

It obvious that the lens was broken. Quickly Mr. C checked inside and said that we lost it completely. I even could hear the cracking lens when we weighted. We cannot take picture albeit looking the objects. The glass lens were shattered (inside) that we could recognized from sound.

Solution:
We delivered the lens to Nikon Office in Singapore. We still have receipts from shop where we bought the lens (Cathay Photo in Peninsula Mall). Technician in Nikon said they would try to fixed the lens. On that time (2006) Nikon 18-200mm just came out to the market, so any slight problems were under scrutiny from Nikon. About 4 weeks or more we came back to pick the lens. Instead they gave us the brand new lens to replace broken one. Big relieve. Big sigh. 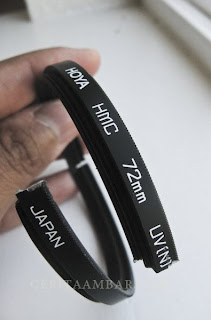 It happened on Saturday 23rd August 2008 at our home in Sunnyvale, US. I'm in middle using Nikon D300 borrowed from friend to try out this weekend. Packed light backpack I was off down stair into garage. Right on the end of last step, one of my shoulder straps was come off with light ‘click’ followed by bang on the tile floor. It was not a big bang but only shy loud. I picked the camera with shivered knees. It wasn’t mine. Oh God please please please.

I checked the camera. Still intact perfectly, no scratches or any obvious marks. But then I folded into the lens. It was dent, slightly bended right on front. I could see sort of small wire came off from the filter. I lifted up, weighted it to hear any glass crackling. The sound just make me sunk. It was glass-shuttered sound. I decided to leave it until Mr. C inspected it.

Solution :
Mr. C managed to open the lens cap. He used screw driver to release the tension that created the bend on the cap. We could see that the glass sound came from Hoya UV Filter rather than from the lens itself. Mr. C cleaned all glass bits on the filter using Air Duster (pressurized).

After cleaned the glass dust, we got to cut the filter frame to let further examination to the lens. Using small steel cutter then split the Hoya into two pieces. Before that he closed the lens glass with paper stick on the paper seal to protect the glass's lens. Mr. C closely examined the lens, did few shots. He said should be ok. I was more than relieved. Better lost US$70 than US$700.

Other Drop Test from Ken Rockwell, his experience in Yosemite and other 18-200mm users.

Note : Both pictures taken from 2008 drop. I did test again for taking picture at Santana Row. It will take days even weeks to realize long term damage.
photography