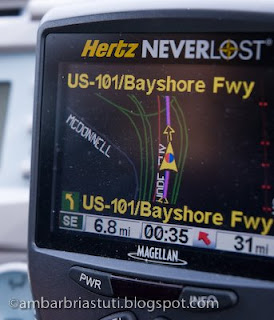 I’ve got new friend called Bernie. She’s black, tiny about few inches square with robotic sounds. She will telling you what you’ve should do. Her craggy American accent says “Keep – left - on - U-eS - one – zero – one - then - exit - at - San - Thomas Expressway.” Few minutes later broke her silence order me to, “continue – onto - next - one – point – one - mile”

It took few minutes toddle her buttons. Tell her where I need to go, sometimes that I don’t know exactly. I hate her really. This is the very first time I had her. As you see I don’t like people give me order, specially a machine. Mr C pressed me to stick with the old paper based map, but since America is lots bigger than UK or Singapore then yes I need something more sophisticated. I hate her but need her badly.

I am used to go online maps such as streetdirectory, theAA, multimap, yahoomap, or googlemap. They are quite reliable. You’ve only input the destination and whoa…they’ve created path to you or such step-by-step directions. But Bernie, she is just different. She is the only buddy when I am driving albeit being my static navigator. I began familiar with her voice. Sometimes it reminded me to learn English, probably it will give TOEFL test result better.

I wonder if the reason to have Bernie totally unfashionable. First, it looks cool to have SatNav as everybody having on their car. But I have got free anyway. Reason two, because I am too lazy to open pages of map book. Indeed has some fancy contour etc but who cares? All you need just how far and how long it should be to do the journey.

Reason number three, I have got funny snare when study the route. What? A girl read the map? I started to believe that girl cannot read the map. They are hopeless. It just like doing pararel parking. We discussed about why man have a very good space conscious than women. Is that related with brain? How they working in distances? Is it related with genetics, some funny protein produce better DNA? or because kids plays motor car since they were not stand on their own feet? 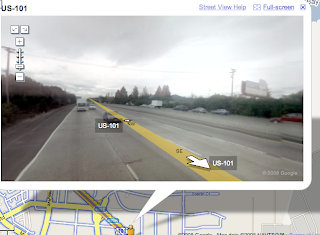 When Google producing Street View make you like walking on the street in California (not all Silicon Valley covered yet), it 's create furore about security and privacy. Pentagon seemed not happy with 360degree view of it’s based in Texas, meanwhile people in Europe thought it can be violate personal privacy, but in USA American might found this amusing. You might check 10 bizarre sights on Street View. Some of them need great imaginations.

Bernie or Street View is just one of our obsessions to looks things in details. We are living in the edge of Big Brother society. You actually create a robot. It's you.