February 29, 2008
I don’t have TV set at home; we’ve dumped it in the rubbish. Enjoying television on computer screen becomes an alternative. Internet TV here means that we’ve using online connection to download the program and then watching it (on demand TV). So don't misinterpret as watching conventional TV on computer screen. Unlike others Joost works on P2P which is different with other format. It’s bit like Digital TV but some of the program using video streaming. At the moment BBC iPlayer not available for Mac, while Apple TV is rather more friendly for iTunes user.

The unique system of Joost created millions of tester since introduced to public early 2007. I’ve got invitation and play along. The only things I spot from Joost is works based on P2P it’s runs quite smooth. Joost been created by Skype and Kazaa founder Janus Friis. The only thing that annoy me some of the programs only available in US and Canada. Most of the channels were live music or interview/documentary of the artist. Joost software quite easy to download, but it will consume your screen and bandwidth.

Predict : love it! But not for my daily basis. 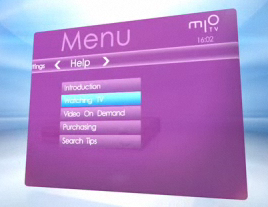 I had a chance to try this out last year (May 2007?) for about two weeks while in Singapore. Mio TV designed for SingTel subcriber to allow user integrate with broadband to enjoy on demand programs. It looked posh –yeah yeah specially with shiny HD TV, but the interfaces was horrible. Really slow moving from one to another programs albeit buying it.
The price of programs use credits which then you paid for subscriber in the end of month. Say I bought 2000 points that would be enough for 10 programs Life Style. It integrated nicely under Window Media, only comes really clustered and painfully slow.
Most of interesting programs come free such as Top Gear from BBC (yups I finished the last season without paying it). But program for 6-10minutes cost about 200 point. Why I call Mio is ridiculously expensive.
Predict : not going to use the service for new comer, but if you already Sing Tel subscriber you’ve might go for it 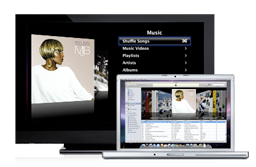 Ok I don’t have a fancy Apple TV box but instead I enjoy it through iTunes video podcast. What you do just choose the program from iTunes directory > Apple TV and download from there. Some of the programs actually on High Definition (HD). I download from Washingtonpost.com about China through iTunes, watched it in amazement. Indeed good quality, and all you do just control the preview using Front Row. I had a chance tried out YouTube and Flickr integrated with Apple TV in Taipei Apple Store. For quality of video, Youtube came on the bottom class as most of video submitted there in low-res make it unpleasant experience.
Now Apple TV has better performance for renting video/movie. You have to watch it in 24 hours otherwise you lose it.

Predict : not going to buy it as I am already have apple computer

Just been launched Christmas last year but iPlayer already got lot attentions in UK. BBC is really catching up in digital era by moving most of it's program download through internet. It allows back to 7 days program combined from different channel of BBC. All FREE but only for UK viewer. But already BBC has deal with Apple to sell their program on iTunes. Popular programs such : Dr Who, Ashes to Ashes or Life in Cold Blood with David Attenborough can be enjoy outside UK.
The interface quite neat and tidy. The search is not easy unless you know the name of program and the schedule on air. Once you download you’ve got 7 days to watch it and then self-deleted. I love this facility specially when you struggle with disk capacity.

Compare to Channel 4 On Demand (which it’s news collaborated with CNN), BBC need something to make search better. In Channel 4 I enjoyed Grand Design by Kevin McCloud and let you watch for longer than 7days.

Predict : love it ! but to buy through iTunes? Hmmm…