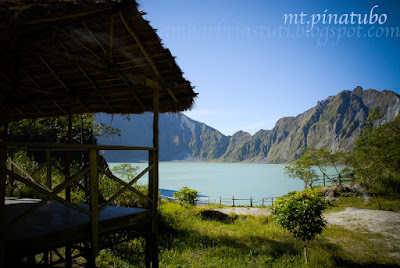 I am just back from trekking Mt Pinatubo in Luzon Philippines last weekend. It was amazing experience for me who finnaly got first hand witnessed the scale of eruptions 1991 -called second biggest after Krakatoa 1883.

It came to my realization that the effect of Pinatubo also create global increase of temperature into about 0.7F, released 125,000 km2 cloud into stratosphere. I saw hundreds of meters ashes cliff that surrounding the crater of Pinatubo, looks fragile due the heavy rainfall sliding into the rivers.

The trek started in early morning from St Juliana village by 4x4 wheels strong jeep, then continue across the sand field and river for about an hour. Then another three hours to go up followed the river stream to the crater. Mt Pinatubo peak actually gone during the great eruptions leave 2.5km wide crater with turquoise lake. Believe me...it was nice had a dip on the lake.

It was fascinating for me to see how the young forest develops. I did not see big trees, only one two tree ferns that actually takes more than ten years to settle. The Aetas -original tribe living on the Mt Pinatubo also back to the highland. They hunts wild animal, grows bananas and plant paddy on the fertile land. Most of Aetas survived from 1991 as the government and US Military based in Clark monitored the activities closely, create massive evacuation that saved many lives.

The weather on our side. It was clear, beautiful day. I managed take few shoots but mostly on video. I did forget to take more CF card (lesson to be learn) and made dash around city of Manila. Surprisingly I found 1 GB card, no more than that. Arghhh.......