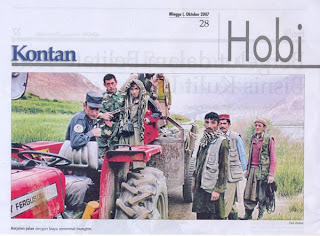 I was stumble upon Tempo Magazine edition No. 05/VIII/October 02-08, 2007 which I bought from Indojaya shop in Taipei. One of the article on page 14 was getting my attention. Yes it's about backpacking. The title called "Mudik Backpacker" as mudik or pulang kampung is a tradition in Indonesia when everybody back to hometown after fasting month of Ramadhan. It is a celebration albeit priceless moment that you want to spend with the whole family. Actually Tempo's coverage more likely about backpacking gear rather than review about the activities.

In it I found just little reference about www.indobackpacker.com - a website I managed in last two years. The web has been regard as a source for information about places to visit in Indonesia, tips for being backpacker and also travelogue from people around the world. It's quite sweet surprise from me after so many media made story about backpacking's trend in Indonesia. About one week ago I've been interview by email from another media. KONTAN a business paper gave list of questions about how to backpacking in safe way. Also on the article there are great backpackers such Agustinus Wibowo and Trinity The Naked Traveller. I have been fans of those travelers as they're writing in distinctive style. Agustinus's blog most in english has journalistic side of backpacking in countries battered by conflicts. While Trinity wrote in her blog in Bahasa Indonesia which has poignant and truly entertaining stories.