A midnight at the highest building in Shanghai 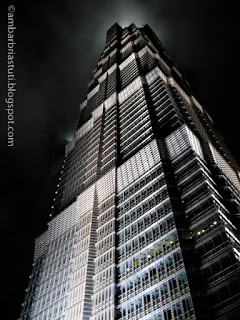 Jin Mao is the undoubtedly the highest commercial building in Pudong area, and the fifth highest in the world. It's also landmark of Shanghai along with Oriental Pearl TV Tower. The two are sort of manifesto of China to the world that they can conquer the world.

Monday night we had session of dinner in the mall opposite the TV Tower called Super Brand Mall (aaah....see how imaginative the Chinese is). Then walked about 10 minutes down to Jin Mao. City of Shanghai pretty much never had sleep. Tourist were everywhere, snapping camera to the building or just having self photo done. 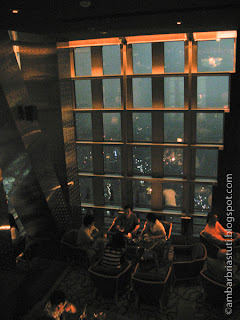 Enter the building we ended up had to go to 56th floor which a lobby of Grand Hyatt Hotel. Then move to another lift to 58th to make reservation. And wait for another 15minutes or so on the magnificent view of the floor up to the sky. It's bit kind of de-ja-vu because remind me of the Star Wars : Return of the Jedi. Funny as since arrived here we had Star Wars movie all night in Telly. The void has rounded walls of hundreds compartments. The light created a superb glow exactly like the scene when Luke faced his long gone father, the Darth Vader.

Then we manage to go up at 87th on the place called Cloud 9. It's a bar basically, we couldn't get to the Observation Deck because already late night. Yes we arrived to see the night view of Pudong. I'll tell you that the view was amazing, apart from columns inside that blocked my sight. I had to curse my self because left my camera, these pictures produced with a pocket camera.