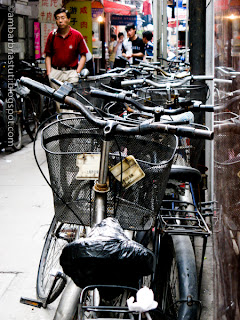 First impression of Shanghai was traffic. There are plenty of cyclist around the streets. Most of them are quite old cycle, may be more than 5 years old. I can see the rusty bar, cranky wheels and ripped saddle.

I was surprised about not many people in Shanghai own motorcycles as what I saw in Vietnam. In the morning bustle, Hanoi’s street was packed with moped vehicle. But in here, yes I saw few of them, not so many. There are few theories about it. First, the public transport quite reliable. The city bus and Metro (sub-way) are connected to many public places. Second reason that in Shanghai the city concept of urban planning were mixed between commercial and residential.

You will see many houses and shops are integrated. Since most people in the city relay on small scale business rather than industrial stage in urban, so people progression not so far away. People only travel when it’s weekend or public holiday. In daily basis they might uses taxi and bus, while train mainly for long distance journey.

Cycle is the only answer for cheap and easy transport for Shanghainese. That’s also explain the reason number three that money is talking here. China is the emerging economic super power but there are big gap between the top and the grass root people. You must not surprise that see beggars on the street or more people do some odd jobs. They can be looked really wealthy but these people only ask tourist for money. Not to the local. 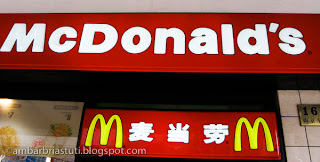 Money also the main reason China became open to the Western’s investment. There are lots of McDonald here, more than I can found in Indonesia. In the East Nanjing Road itself there are four McDonald. Some well known franchise such as Starbuck or Costa were spreading all the places. Including hotel’s chains.