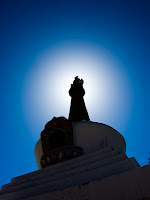 I put most of pictures on Flickr with regard of few things. It's likely easy for me to crossposting into blogs, store it as the main photo page. Also I was able to 'geotag' the pictures so people can trace the location from Maps or Google Earth. Not many pictures produced during 12 days trekking. Roughly about 800 pictures for 3 weeks is nothing. I brought several CF along with me from 1GB to 4GB but barely use them all. I shot on RAW format, edit with Lightroom to change in medium resolution.

The camera and battery works very well on the rough environment like Himalaya. It's been tested in Borneo and Yosemite. But the lens seemed been created for D200 not D70. It became less responsive and strange behaviour (stop focusing on the corner I want). I was tried to make the lens and body works together while in Singapore but not enough time. It simply refused to get on together.

Suprisingly the battery was great but that's because I did not use camera so often. I thought we will facing electricity problem for charging battery on the high altitute. Namche 3440m might a big place to regain all the equipment back to life but turned out you can get electricity even until Lobuche 4910m. On some points you've got to pay for charging which is about Rs 100-150 an hour -that similar with the price of 1lt mineral water. I was prepared with 2 spare battery with other 2 uncharchable. But during the trip I only used one battery.

My main concern about camera is the sensor clearance. It turned out that the trekking path was so dusty. Even for human was unbearable. To add my misery I lost my lens cap while we had a cup a tea at Pangboche. I managed use my fleece to cover the lens all along the trek.

The fisheye lens was forgotten. It was buried under the stuff that porter carry all along. I simply couldn't find it. May be I am not a good photographer (ie did not have enough effort to change my lens or got out from sleeping bag), but the point of traveling is enjoy yourself. I was able to absorb what the Himalayan magic, not just snapping pictures for personal collection. I am happy as I enjoyed the trekking. Obviously it was hard work but I am glad I did it.