Nila Tanzil is known as a presenter Melancong Yuk a traveling program in Indonesia national television. On her reporting of Floral Show in Malaysia she faced dreadful bureaucracy that led her to write in blog about it. Guess what? Oh the Malay Minister Abdullah was not happy about her. He felt that she was challenging the Malaysian uuthority. She now lost her job as presenter after the whirlwind of those spat.

I must say that as a blogger and travel writer I always want to say honest about things specially about places, people or government. My honesty did not stop me to visit Malaysia or other country. Every places is unique, but by not saying thing as the fact we saw during the trips that count as lying. So if he want us (blogger) to say nice things in here (blogosphere). Forget the media, forget the power of RSS. 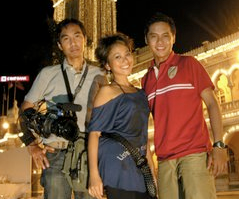 The sad thing about the Minister that he comments about woman blogger as liar.

“All bloggers are liars, they cheat people using all kinds of methods. From my understanding, out of 10,000 unemployed bloggers, 8,000 are women.”

Where’s the magic number come from? Why woman? So sad that he spoke that on a meeting with media during another promotion of Visit Malaysia 2007. Are we (woman, blogger, traveler, writer) only talking rubbish here?