US VISIT : I am a good visitor Sir! 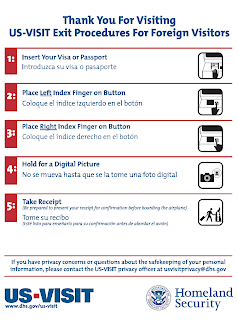 December last year before leaving San Francisco Airport back to Heathrow I was facing a strict immigration rules. Being finger printed, taking photos and also gave reference number and stored it digitally.

Homeland Security launched US-VISIT (United States Visitor and Immigrant Status Indicator Technology) since September 2004 in aim to increase security of visitor traffic enter and out US. Basically they try to match your identity against data captured by US Embassy where you’ve applied visa that you are the same person enter the US. They reckoned the system also reduce the passport fraud or even identity theft.

So yes I was convinced that this technology will good enough to do itself. When in the kiosk just before boarding to the Virgin plane, I was facing a doubt. I did not see immigration officer around but only two big machines looked like a cash machine for me.

I read the command on the screen. OK put my passport in. Hang on… the machine simply could not scan. I started feeling uncomfortable because the guy next to me did it instantly. I started all over again, still came up with the same conditions. I gave up. 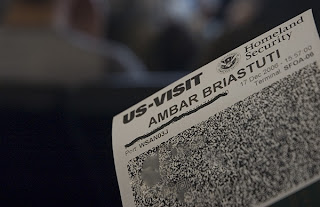 A middle age lady turned up and helped me to deal with the machine. She explained how to do if my passport couldn’t be scanned. She manually put the passport number and also personal ID. Ah she actually on duty for helping desperate person like me.

Then she asked me to check if the information stored correctly. I pushed the button said OK. Seconds later just like the cash machine it turned out the printed statement with had funny digital data on it. My biometrics data stored on this piece a paper.

I impressed but not really.
usa