I Want to Touch Jellyfish ! 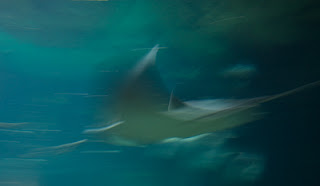 Sunday 10th Dec 2006 we supposed to go whale watching in Monterey Bay. But last week west coast been battered by heavy showers and storm. On the last minutes we tried to call the boat. We decide to go there anyway, expecting that weather will change soon.

It was wrong (again). After get up early morning grab a coffee we set off early from Sunnyvale. We knew that chasing whales will be canceled, the lady said that actually now it's not a good times to see this massive fish. February-March would definitely the best time, and you might see killer whale if you are lucky. 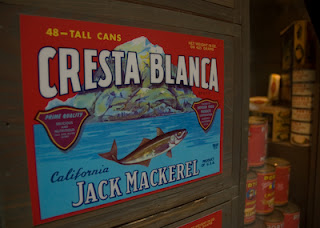 Anyway to spend our time while we were in Monterey we have a look into Monterey Bay Aquarium which renowned for the jellyfish exhibition. The tickets are $21.95 as I thought quite expensive. The building of the Aquarium taken from sardines canning company. In early 1920's-1940s Monterey well known for producing seafood on cans. 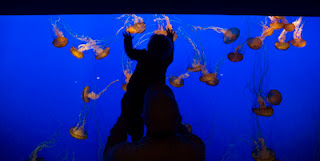 The entrance was a brief history about how the fish industry in Monterey used to be. In heyday of sardines, people from the beach can see the 'silver wave'. As they described the mass movement of fishes swimming follow the surge of water. I just found out that to put in the can then put in the huge steaming machines. We followed the route to the kelp forest. It was a big tank with many sharks around. The WOW effect were present here.

Then we went upper floor to see the jelly fish tank. It was great presentation of the many kinds jelly fishes here (Ashamed that I thought they are only few !).