Behind the Scene (Yosemite 5 end) 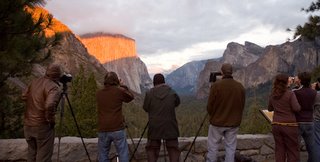 I have been photographing landscapes for a few years. My love of photography back when I was in uni or even further my childhood. But the only thing that led me being a photographer because I love the beauty of nature. As George Mallory answered when he asked why he was climbing the mountain : Because it's there !

Yosemite wasn't an exceptional. It's grandeur....it's beauty that drove people to see it. I have to admit before set off to National Park I am just want to be there, sit and watching. Say : ah...ah..ah then grab a camera snap...snap..snap ! After that I realized that to explore this place you've got to walk, climb, crawl, cross the river and fighting with temperature. 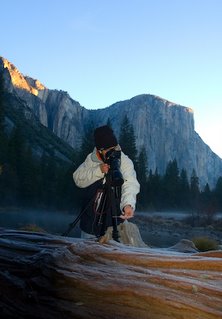 I was there with a friend Olivier. He is a serious photographer who armed with lovely EOS D5, many lenses and tit bits in his compact rucksack also Photographer's Guide To Yosemite Book. A night before we sat together watching his photo taken last year in spring. It was lovely collection, most of them were landscapes and macro -the two area that I played most. Mark in the other hand is an experienced hobbyist. He had been playing with camera for about 21 years since in uni. His major is in macro and wildlife animal. He will spend hours chasing animal and taking photographs. Anyway I wasn't that keen.

So yes...in Yosemite I have been surrounding by 'expert' but to add misery we did not take tripod and many lenses with us. Only monopod that Mark uses it for wildlife which aim to take active movement. We relay on cameras to do as we told, praying that light will on our side. In autumn the sun will the only source of light, and because Yosemite is a valley you couldn't get much lighting to cover whole area. The valley is built by massive granite wall circulating for 2 miles across.

Now I understand why Olivier was in fully arms. The light conditions was not an ideal for landscape. You've got to deal with the situation. Take photos now or never.... So yes I took it for granted. We had two brilliant days for climbing upper Yosemite Falls. The next two days was not bad, apart from early birds down to the Valley and Mirror Lake. 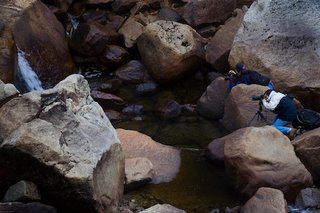 As a bonus Mark met bobcats for the first time in wild world. I was thinking it looked like a mountain lion. I was wrong to send him take photos and end up in 30 minutes worrying something will happen. Olivier said last year he met two brown bear at the same place I spot the bobcat. Early morning obviously a favorite time for animal looking for prey. Ok it's noted.

Season also play important rules. We were in autumn near winter. The sky still clear, temperature quite mild, no snow and no gusty wind or storm. But nature can change just in blink of eye. One moment I can see the blue sky, then turn misty cold thick clouds covering the peaks. Temperature can drop easily. We ended up had several layers of clothes including gloves and hat. I get used to play camera's button with the bare hand. But since the cold unbearable I had to put the gloves on and off.

Anyway we always hoping that we will back doing some more photography sometime. But as I wrote this blog I glanced to other screen show my Yosemite's pictures. I can feel the magic, I can feel the grandeur. Yes...it's worth to die for.
photography usa