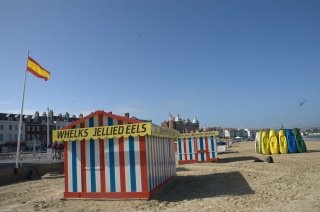 England appeared to be friendly for me. It was cold, oh yeah for 12C it must be nice for Briton. Little bit windy but many rains. Spring nearly end to see more sunshine in the summer. Talking about weather is always interresting for British people. You can start conversation with, " It's a nice day, isn't ?" and cheer up for the whole day, even when the weather become dull and grey-ish. 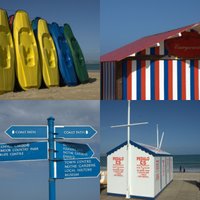 I enjoyed little walk in the Weymouth town. It lied just by the beach, also known for the fisheries. There is the curves of Georgian Esplanade that looks out over Weymouth Bay. Weymouth is best visited in summer. In the Victorian era this place was a favorite holiday including King George III. Also the town played a key role in the D-Day invasion of World War II. It's busy with ferry connection to Channel Island and France.

Not far from Weymouth there is Portland which is famous for the Chesil Beach -forms of pebbles stretched nearly 18miles along. I was there few years ago. It was lovely. The beach really clean and the waves attracks wind surfers or surfers (the difference of the two is the board attached with sail for the wind surfer).

On Saturday I had nice walking up to Osmington Mills which is only about two hours easy route. We went just right behind the Smuggler Inn then continued up hill along the beach line. It was fantastic day. Walking in the British country site was always inspiring. The hundred years houses, the fields, the cows, the meadows and smell of the flowers.

After little walk we managed to get some 'decent' food : the fish'n chips. This dish is famously for take away on day-out. Chips (or french fries) is basically deep fried potatoes. And cod fish with battered then fried in high temperature created crispy coating and lovely texture. Sometimes served with boiled peas, or if you wish add curry sauce/chili sauce on it.

I almost forgotten about British food. After been indulged with so many options of Asian food in Singapore, here we don't have many choices. You've got to be careful with your diet or you end up being supersize me.

Also I managed to watch the Da Vinci Code in the local cinema. It was OK. I was little bit dissapointed about the script. Anyway Sir Ian Mc Kellen was a saviour. The ticket cost me 5pounds compared with SGD$8 in Singapore (about twice). Outrages !
photography singapore united kingdom