Onroad 2 Borneo Revisited :This is not HILTON 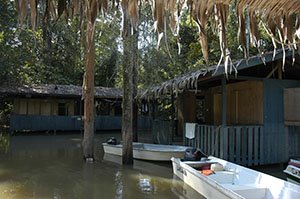 After a really good night sleep at Summit Lodge in Kinabalu Parks we checked out about 11am to catch the SIDA Express bus to Sandakan. We waited outside the Park until the bright yellow coach turned up. On an email from Eugene, this bus recommended to go to Uncle Tan Wildlife Jungle Camp HQ in Gum Gum village. It took about 4 hours journey to the village. The night before I tried contact Eugene to get latest development about the camp at lower Kinabatangan River. It was flooding in last 3 weeks so we just want to know whether the water level started residing.

On the junction of KK-Sandakan-Tawau, we’ve been stop due the immigration control. The officer with blue uniform in military style carrying riffle jumped up to our bus to checking ID or passport. I sat on the very end of the bus and got my chance. He asked my ID and I gave him my scruffy Indonesian passport. He quick glanced on it and notice few things. Then he smiled (pfffff…thanks God), asked questions in a good manner including where I have been and what I have been doing. The two British bloke just left without checking. 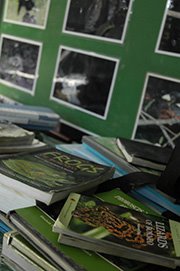 The bus driver knew where we should go. So we ended up in the Batu 16 Gum Gum just by the Uncle Tan office. You can easily spot this office since they put a big sign on top of their second floor where several basic room for stay overnight. We would not stay in this place. We want straight down to the camp –about 2 hours away from the HQ. But we got problem. They did not mention that we should arrive in their office at least at 130pm, otherwise we will missed the shuttle transport to the boat point. I argued that last night when I rang them I clearly mention that we will arrive at 3pm. And we did, not missed a single minute. We understood that we would not get chance to see orang utans at Sepilok Rehabilitation Centre. But that what we wanted. We just want to go to the camp.

After negotiation and calling the big boss (Eugene –apparently he is the son of late Uncle Tan), he agreed to transport us with fancy Toyota 4wheel drive fully AC at 5pm. Thanks for the email correspondence before our arrival and also Mark’s tips about using camera flash. So here we are….on the fancy car. We drove back to the road junction and again met the immigration control. But now they seemed not bothered about us. I asked about these to Shahril -the Uncle Tan driver. He said that Malaysia aware about potential smuggle immigrants from either Indonesia nor Philippine. 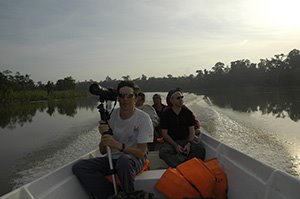 About 6pm we reached the Batu Puteh village not far from Kinabatangan Bridge. I saw kids swimming happily in the muddy river when the sun started going down. These kids enjoyed the river just like their parents. Some of the parents went to fishing with nets on a simple boat. A lady showed me proudly her half day fishing : a bucket full of fresh water prawn and fishes. A lovely selection…She said that flooding led more fishes to go further, meant you can easily caught them in the net.

Someone coming with a warm welcome. The guy –about late 20s typical Asian, dark skin, well built, long hair with a black Uncle Tan T-shirt gave a hand to everybody. His name is Lan. He would take us to the camp along with two others kids. On the dark, we set off with the boat. On our way, Lan showed us animals that he’ve seen it in just a glance with his bright spotlight. It took about an hour to reach the camp through oxbow lake and floodplain of Kinabatangan river. As I mention before, the camp in flooding conditions, means that now the camp became a water camp. Actually the location of the camp is by Danau Girang or Lot No 6 on the Wildlife Sanctuary. The sanctuary level means that people can across the land without permission but not allowed to logging or farming. 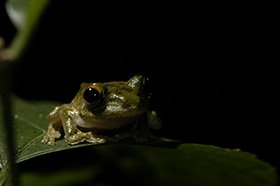 An oil lamp in the dining room was the only source of light, quietly dimmed the rooms. Sound of owls and frogs gave impression to remoteness of this place. The dining area was the only place that we can stay that night. The rest of the camp was about half on top of water level. The huts that supposed to stay were totally un habituated. On that room we met three people from Sweden that arrived earlier on that day. They been waiting for us for dinner and the night safari. I can see that the room already been set up with 4 matras with mosquito net hanging about 2ft from the floor. This is our dining, bathroom and also sleeping room for the next 3 days. Since I am the only women in this camp, Mark had to drag me out with the boat every time I need to wee (apparently we called it No 1 need and the No 2 need you can guess what it was…). 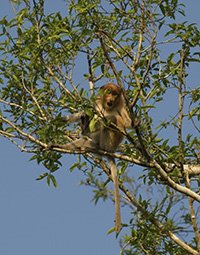 We had a good dinner on that night, A pack of rice with lots of stir fried vegetables and chicken curry (with lots bones of course !). Then we have a half an hour briefing about what the Wildlife Jungle Camp about. Since flooding we were second guest in this camp. Most of them cancelled the program due the incapability of the place. Imagine that in the dry conditions the camp actually quite spartan and basic. With the flooding even drink water and toilet would be major problems. You’ve got to prepare for this situation. Previously we had to filling the disclaimer form regarding the flooding, including possibility that we couldn’t spot as many as animals that used to be easy to find in this area including elephants and orang utans. 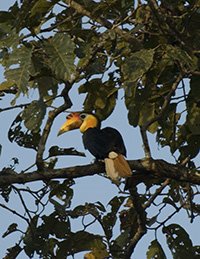 The first night safari were great, we spotted frogs, owls, eagles, scorpions and flying foxes. In two hours we were scattering the river tried to find animals. Lan was really experienced guide. He told us the latin name, common habitat and the diet of each animal we found. I excited with this new experience, specially I am not a wildlife photographer. Lan himself is a keen wildlife photographer. Most of pictures on the board of the camp and the HQ were him. Eugene –his boss also a mad photographer. If you see some crocodile pictures or kingfisher or snake, they were all amazing. It needs a lots effort and determination to capture such beautiful moments.

In the next morning we started early to see how the animals moving from their territory to the jungle for feeding or daily activities. We went to the oxbow lakes to spot some of proboscis monkeys. We saw eagles as they moved to another area, also the famous one –Oriental hornbill. We had another safari in the mid day, then we had broken machine when we back to the camp. Problem was : we got to go upstream, so Lan decided to take a boat by river bank away from the main river. It took us more than 45 minutes through the swamp area with cutting the tree and leaves along the way. We survived by local boat just passed the river, carried us to the Observation Tower opposite the Uncle Tan camp. 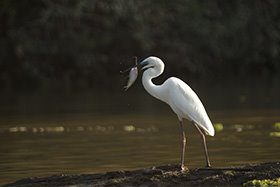 There is a list of wildlife animal that we spotted in three days during our stay at Kinabatangan River.
I m still looking for the latin name for all the animals above. Please inform or correct me.
Update 20 March 2006 : thanks Obot for the corrections !
travelling

Anonymous said…
I envy you... I hope i still got the time to see kalimantan's wildlife before it turned to desert...

Anonymous said…
Wah hebat ya petualangannya
ngomong2 udah pernah meng-explore jogja ngga?
such as simple life of jogjanese maybe you can compare with singaporeans who work extremly hard with them who work extremly nyante